We kicked off the day with a morning rehearsal in the classic favorite location, the hotel bar garage. We reviewed Akh Ty Step, Ekh Dorogi, and Mitelitsa. The first two were in dire condition, but a sectional helped us along. The T2s are indebted to Connor Wood for his endless help in every song.

After rehearsal, I went back to my room to get ready for an otherwise free day while the Liturgy Crew remained for their “20 minute” rehearsal. About an hour later, Andrew, Zach, and I left the hotel and set out hoping to go see the Armory in the Kremlin. Sam, Eric, Phil, Connor, and probably some others went to Izmailovo Kremlin and Market, which I saw yesterday, and Connor got a fantastic Georgian outfit which he should probably not wear in his upcoming visit to Georgia. 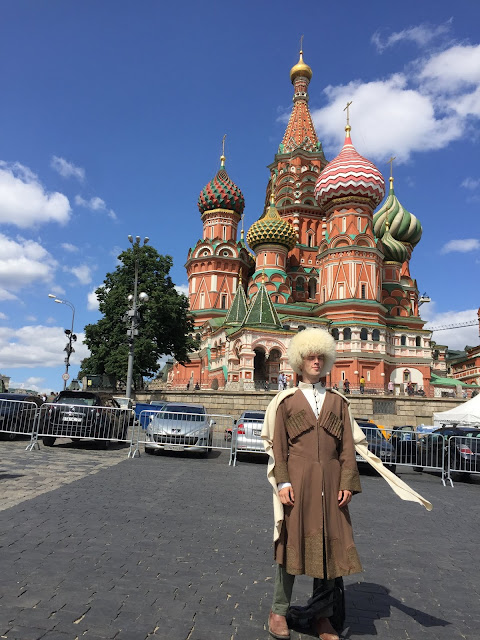 Izmailovo Kremlin is awesome, like magical gumdrop land part two (part one being St. Basil’s Church on the Red Square). The armory was sold out, so while Zach checked out the architectural complex of the Kremlin, Andrew and I tried to go see Lenin’s cold, waxy corpse, but to no avail (the woman guarding it said it would be open from 10 to 1 tomorrow, which doesn’t work with anyone’s schedule, but Lenin’s a busy dude). Instead, we went to the Museum of Soviet Arcade Games, which also featured a wall of Soviet calculators. Andrew slaughtered me in a driving game which is ironic since I’m from Los Angeles and drive quite a bit when I’m home.


Next, the three of us went to meet Anastasia at Chisty Prudy for a quest. I had roped Anastasia into helping me find an old friend-of-a-friend with guidance from only a confusing satellite map from google earth with a circled destination. Our wifi-less group finally connected with her after stumbling upon some random miracle wifi, and we were soon on our way (granted, in the wrong direction). I finally figured out the map and we arrived at the old apartment building which this guy had lived in back in the early 90s. After a few minutes, someone came out and Nastia and I approached him. He unfortunately didn’t recognize the name but was nice enough to run upstairs and check with the person he knew who’d been in the complex the longest. She also did not recognize it. Andrew gave our quest a solidly passing grade of a B because we not only found the building from the shoddy map, but also found someone, and he checked with an old person, AND we saw Chisty Prudy, so, not too shabby after all.


Next, Zach and I went to the Tchaikovsky Hall for the concert and met a group there. Connor showed us his Georgian finds, and the music was so beautiful, it put a few of our members to sleep. Michael Chang’s facial expressions indicated that he enjoyed the show. We even partook in rhythmic soviet clapping.

After the show, I went back to the hotel, ate dinner, and then started the DnD one off which Alaric and Brooks orchestrated, and Ladi took incredible notes on. All in all it was a full and successful day here in Moscow.