- May 25, 2019
by Ladislav Charouz At least a couple of us started the day by crawling out of bed to close the window curtains and falling back asleep. In Moscow, the sun rises absurdly early this time of the year – around four o’clock. Fortunately, I remembered to close my curtains the night before, so I arrived at breakfast quite well rested. The whole day was dedicated to rehearsing. We spent over two hours at Muzykal’naya Shkola im. V.I. Muradeli practicing the spirituals we will sing tomorrow at the Christ the Saviour Cathedral. “Steal Away,” “Ride the Chariot,” and “Little Lamb” went quite smoothly, but a whole debate arose as to whether or not we should swing “Jericho.” With good arguments on both sides, we charted an intermediate course; I believe Stepan’s words were “swing just a smidge.” The toughest song by far was “Ain’t-a that Good News.” It is a piece in which timing, especially the entrances of different sections, is of paramount importance, so everything
Post a Comment
Read more

- May 24, 2019
by Alton Wasson I arrived a day early and was welcomed by Stepan. We enjoyed a Georgian dinner. After a walk across the bridge over the Moscow River, I went to bed early to catch up on lost sleep from the flight. The chorus arrives today so we spent the morning buying folders, SIM and metro cards and phone plans in preparation. This afternoon we will greet everyone arriving at the Marriott and then all settle in to rest before our day of rehearsal Saturday and the festival performance on Sunday at the Christ the Saviour Cathedral. At noon Stepan met with a nytimes friend and a Grammy nominated Russian church choral director for a lively conversation. He will attend our concerts and support our efforts here. He may also come to the US to offer a master class next year. As they arrived each person received a new schedule and a lovely greeting letter from Stepan appreciating all the contributions from many individuals who helped the trip to happen. He invited us to n
Post a Comment
Read more 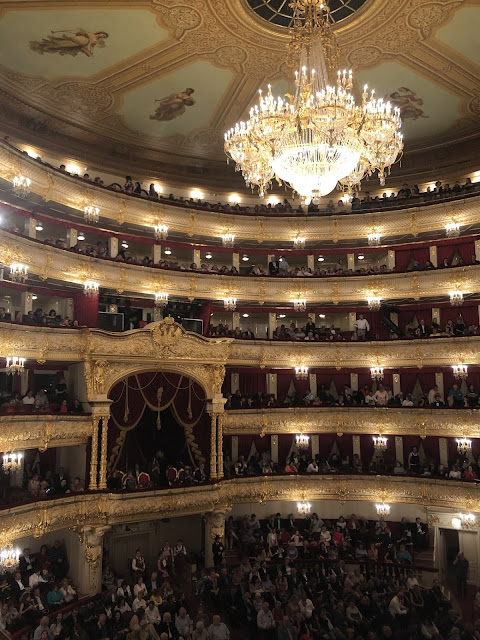 by Peter Bogyo It has been 42 years since I was last in Russia, during my senior year at Yale.  Only then it was called the Soviet Union. What a difference those years have made. One of the first things that struck me when we exited from customs into the arrival hall of the beautiful and modern Domodedovo Airport was the proliferation of commercial ads all around the hall, like the ads on the inside of a American baseball field or an ice rink- KFC in particular was advertised everywhere, which was not what I was expecting! Moscow seems much, much more prosperous than I recall from 1977, although I have been advised that Moscow is its own special world, and what one sees here should not be taken as true for all of Russia.  Before all else, I was impressed by the number of, and variety of automobiles all around- Mercedes, BMWs, Audis, and Hondas, to name just a few.  During my first visit, cars were a rarity, and almost exclusively of Russian make.  With their
Post a Comment
Read more

A Letter of Greeting

- May 24, 2019
Dear Choristers, Welcome to Russia! Our adventures have scarcely begun, but we can rest this first night satisfied with how far we have already come. We have reached our destination through a communal effort. Some of you have created beautiful art for the purpose of this trip – new symbols of our group that will last for years to come. Others printed music for the rest of the chorus. Some volunteered contacts in Russia who booked us concerts. Some led the musical  preparation for the tour. Some traveled far to submit and collect visa applications. Some transliterated new music. Some have volunteered their finances, others time, others energy and wisdom. Some, of course, have done more than others – and to them we are thankful beyond measure. But now is the hour when all join together equally in the great work we have gathered to do, which is the making of song. We have come here through the efforts of many, but we will succeed here only through the efforts of all. Eve
Post a Comment
Location: Moscow, Russia
Read more