by Kit Lorentz On the morning of our last day, diverse groups fanned out to diverse activities and sites — various museums, shopping downtown or in the flea market, or just a contemplative walk in the woods near the hotel.  Some weary ones slept in and took a breather from the rigors of successive days of brisk long walks, long times standing in Church service, relentless sightseeing and late-night revels around town or in the hotel’s “Garage Bar”. In the late afternoon everyone gathered at the Spaso House, in the old Arbat district.  This elegant 1913 NeoClassical mansion, originally built by a prominent Russian industrialist, has been the American Ambassador’s residence since 1933 and has been the venue of many an extravagant ambassadorial fête.  Stepan, during his Fulbright scholarship, had been in communication with several of the staff including Ambassador John Huntsman, and had been given a significant State Department grant to help fund this YRC Russian Tou
1 comment
Read more

by Zosia Caes The day started off with a sound lesson for the undergraduate contingent: three hours on a bus is not the same as another three of sleep. Their three AM trek to the nearby woods and shwarma stand was cruelly met with a wake-up two hours later for a bus to rural Rostov, on which young choristers curled into speed-deprived and slightly-hungover balls vainly trying to catch up on sleep. An hour in we stocked up on gas station delicacies, and forged on to the Rostov Kremlin. The 11th century cathedral looked the worse for wear, with scaffolding running up the sides and great holes where icons and sturdier stone were once found. Yet, there was beauty in such imperfection. And it seems that similar sentiments were held toward the performance of the YRC’s “liturgy crew” by the faithful, as they wore pious smiles despite us reinventing the sounds of the Orthodox Liturgy with great liberty and reckless abandon in traditional style. by Ladi, again Ladi, the man,
Post a Comment
Read more

- June 04, 2019
by Andrew Scott On this rest day a group of choristers, myself included, decided to travel to St. Petersburg and explore the city. We boarded a sleeper train for an overnight ride to the former Russian capital. It was an exciting journey, filled with lackluster sleep and bunk beds that were too small for my above-average height. We made it to St. Petersburg early in the morning and immediately set out into the city. We admired the wide boulevards, the intricate facades of the Savior on the Spilled Blood church, and the KFCs which were along our path. The most important part of our walk, however, was its destination: the Hermitage. An intricate complex of buildings, the Hermitage contains a truly massive collection of artwork. We were treated to a free tour of part of the Hermitage, a sign of our growing clout (and a tour originally meant for two people, not fifteen, but nevermind that). The most interesting part of the tour was the well protected Gold and Diamond Ro
Post a Comment
Read more

Back to Our Roots 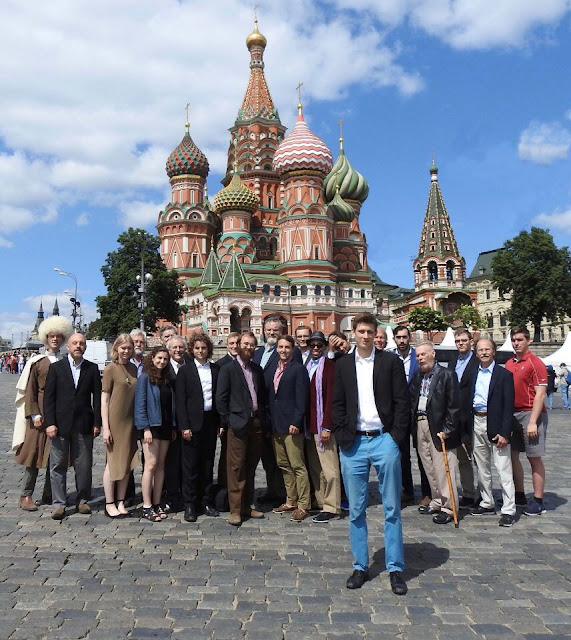 by Stepan Sveshnikov After a morning rehearsal we all headed to the Red Square. We wanted to recreate that famous photo in front of Saint Basil’s Cathedral and Emma Kazaryan, our videographer, wanted to film us singing in Red Square, and an echo and tribute to the old black and white footage of the Mickiewicz chorus gathering a public crowd. The photo – as you can see – was a success. If we manage to produce an album from our four recordings, it will make a splendid cover. The almuni: Connor, Malcom, Anastasia, Alton, Agata, Father Bill, Brock, Ladislav, Hank, Reed, Ernie, Beau, Phil, Elvis, Lance, Stepan, Peter, Michael, Dave, Alaric, Kit, Brooks We intended to sing on Red Square next, but because of a festival and a security drill we couldn’t get onto the square, so we sang off to the side, on the road that leads down to Saint Basil’s. A bit nervously at first, but with more confidence as a crowd gathered (half Chinese tourists half Russians) an
Post a Comment
Read more 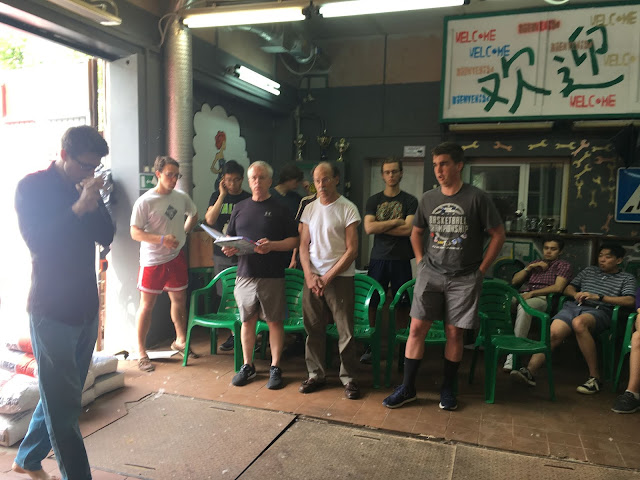 by Renata Robbins We kicked off the day with a morning rehearsal in the classic favorite location, the hotel bar garage. We reviewed Akh Ty Step, Ekh Dorogi, and Mitelitsa. The first two were in dire condition, but a sectional helped us along. The T2s are indebted to Connor Wood for his endless help in every song.  Basses: Stepan, Beau, Michael, Brock, Andrew, Kit, Phil, Brooks, Curtis, James After rehearsal, I went back to my room to get ready for an otherwise free day while the Liturgy Crew remained for their “20 minute” rehearsal. About an hour later, Andrew, Zach, and I left the hotel and set out hoping to go see the Armory in the Kremlin. Sam, Eric, Phil, Connor, and probably some others went to Izmailovo Kremlin and Market, which I saw yesterday, and Connor got a fantastic Georgian outfit which he should probably not wear in his upcoming visit to Georgia. Izmailovo Kremlin is awesome, like magical gumdrop land part two (part one being St. Basil’s
Post a Comment
Read more 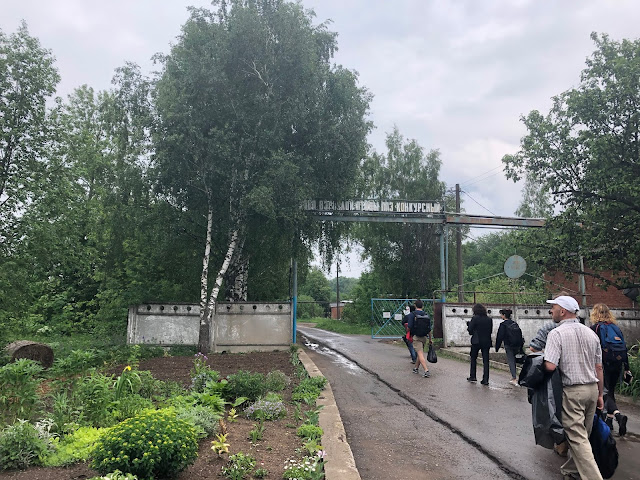 by Gabriel Mesa I would say this day began at the crack of dawn, but the sun rises at 3 AM in Moscow. A smaller contingent of the chorus managed to wake themselves up after the chaos of the free day that came before. Following the hotel breakfast (a hot dog and eggs with a consistency reminiscent of tres leches cake), the 17 of us were off to the metro station. We groggy travelers made our way through the Moscow underground to the Leningradsky train station, and on our way we admired the intricate and majestic metro as always. Upon arriving, we stood in the center of some stalls while Stepan bought the train tickets to Sergiev Posad. Although we were fascinated by the one dollar book stands around us, the piece de resistance was a KFC stall which was the first thing to catch our American eyes. It really is the small things that make such a big difference. After a brief discussion about the improvement regarding service and food in Russian fast food chains, I remarked that in
Post a Comment
Read more 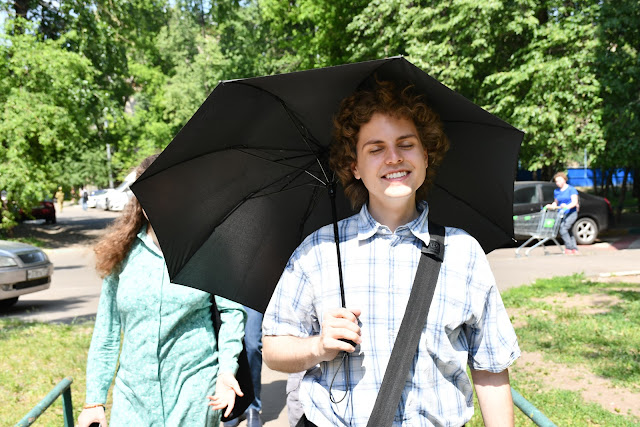 by Ladislav Charouz After a morning rehearsal, Agata, Andrew, Michael Chang, and I visited the Novodevichy Cemetery. While Boris Yeltsin’s grave – a massive Russian flag made of cement – was difficult to miss, we spent quite a while trying to find Dmitri Shostakovich and Sergei Prokofiev. The sheer number of greats left us starstruck. Not only did we find Shostakovich and Prokofiev, but we also happened upon Rostropovich, Rubinstein, and Scriabin (we were also intent on finding Molotov, Khrushchev, Chekhov, and Gogol, but time was quite scarce). Ladislav The sky cleared up as we ventured into the picturesque Novodevichy Convent, but we did not stay too long. For one, much of the complex was under reconstruction, and furthermore, many Yalies are not in the habit of eating breakfast, which leaves them very hungry early on in the day. Upon finishing our lunch, we headed off to Red Square, taking the opportunity to tour a few lavish metro stations. Fortunately for u
Post a Comment
Read more
More posts