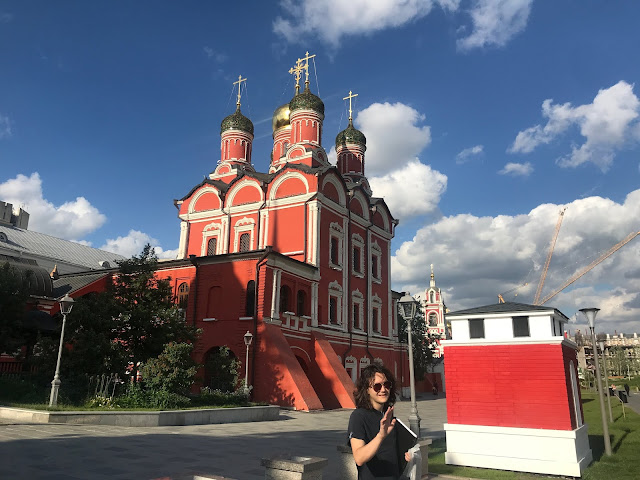 It’s not where we are right now, but somehow it’s a place that none of us can forget. We’re singing this song as we walk back from the Pushkin Lycee, a local Russian high school with a marvelous auditorium, great tea, and girls wearing BTS t-shirts (Fake Love anyone?) (editor’s note: BTS is Korean boy band and “Fake Love” is the title of one of their hits). Alright, forget West Virginia for now. It will come back later. Today we woke up at 8:55am sharp, thanks to some relentless knocking by our very own Zosia Caes. She brought all of us boys to the yard to rehearse in “Bar Garage,” where we ran some of our favorite songs for the concert, including Ekh Dorogi and Little Lamb.

After a quick metro ride and walk, we performed our second concert in Russia. A very cute audience of elementary and middle schoolers greeted us, and we blew their minds with Little Lamb and Brigands. Alaric Krapf made several strange noises, and some girls in the front row laughed loudly during several pieces. After the concert, we maintained our ritual of taking photos with our audience. This is where Sasha comes in. As we walked out of the school, Phillip Vorster spied a teen wearing a blue sweatshirt outside the gates. We thought he was waving at his, but he was actually performing the Orange Justice from Fortnite (editor’s note: Orange Justice is a dance move and Fortnite is a popular video game). Nuff said (editor’s note: in modern parlance, “nuff said” is a contraction of the phrase “enough said”).

Later, most of us spent the afternoon visiting the Kremlin museums. In the world-famous armoury, diamonds, jeweled crowns, and bling bling galore. Breathtaking cathedrals showed us the splendor of the old tsars. The most nerve wracking part of the day ended up being whether 30 undergraduates from Yale could successfully meet up at 5pm in front of an enormous cannon statue. Needless to say, we failed.


To wrap up the day, we visited the museum of Yelenia Gniessen, home to Moscow’s oldest conservatory and one of the best rehearsal spaces we’ve found yet. After some solid Tebe Boga Khvalim openings, we decided to wrap up at around 8pm.

But what about West Virginia? It’s not over yet. We decided to celebrate our day at one of Stepan’s favorite restaurants for dinner. West Virginia came with us. Stepan led us in a song of “Country roads,” resulting in swooning waitresses, an 8-shot drunk Michael Chang, and the best cringing shots of Brooks Chupps so far. Until next time.

by Zosia Caes The day started off with a sound lesson for the undergraduate contingent: three hours on a bus is not the same as another three of sleep. Their three AM trek to the nearby woods and shwarma stand was cruelly met with a wake-up two hours later for a bus to rural Rostov, on which young choristers curled into speed-deprived and slightly-hungover balls vainly trying to catch up on sleep. An hour in we stocked up on gas station delicacies, and forged on to the Rostov Kremlin. The 11th century cathedral looked the worse for wear, with scaffolding running up the sides and great holes where icons and sturdier stone were once found. Yet, there was beauty in such imperfection. And it seems that similar sentiments were held toward the performance of the YRC’s “liturgy crew” by the faithful, as they wore pious smiles despite us reinventing the sounds of the Orthodox Liturgy with great liberty and reckless abandon in traditional style. by Ladi, again Ladi, the man,
Read more